New Fiction by Yours Truly

Announcing that my latest collection of short stories is now available in ebook from several locations. The collection, which I have not talked about much ahead of time, is called…well, just take a look at the cover: 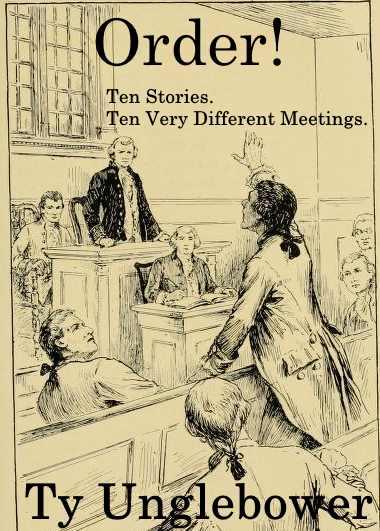 You might be able to guess a few things just from this. But in case it isn’t clear, allow me.

To begin with, I didn’t create the cover art. If you know me, that was obvious right from the start. It’s actually from a nearly 100 year old text book now in the public domain. I had some  basic ideas for designing one myself and I almost did. But when I came across this image in my cyber travels, it was too good not to use. It just fit the spirit of the stories so well.

Which brings me to the next aspect you could probably have guessed by yourself. These ten stories are literally about meetings. More specifically the stories are about meetings that follow Robert’s Rules of Order. I realize that this doesn’t sound like page-turner material right off the bat, but that was part of the challenge I issued to myself when I first started experimenting with this idea earlier this year.

As the introduction to the book notes, I have a rather old copy of Robert’s Rules in my personal library. I flip through it from time to time, wishing without success that more discussions in my life could be conducted according to unassailable formulas or order that could be easily referenced with the volume in my hand. That, naturally is never going to happen. (It actually has rarely happened during the few times I’ve actually been a member of a deliberative body that was supposed to act that way.) But I asked myself, could one write fiction based on such a book?

The more I considered certain motions, and rules and expectations for meetings laid out by the book, the more I answered “yes” to my own question; parliamentary procedure doesn’t inherently eliminate drama. In fact, it has the potential to allow quite a bit of drama, (and humor, and mystery and so on.) It’s merely a mechanism to wrangle in the chaotic nature of human deliberation into something of a coherent and fair whole. It doesn’t lack drama so much as channels it into a far more productive and safe form.

At least in theory.

So, I set off to write a series of short stories, each one dealing with a meeting of some kind. in turn the moment the reader joins said meeting hinges on a different aspect, or maneuver within parliamentary procedure, as laid out in Robert’s Rules.

But don’t forget the subtitle: Ten Very Different Meetings. Some of the stories are general fiction, some are humor. You’ll even find some sci-fi and some paranormal in there as well, while still maintaining a connection to parliamentary procedure.

I am quite pleased with the stories that came about from this experiment. (All between 800-2000 words or so.) I hope you will give them a try, and you can do so for free. I’m not charging for this one.

Why not? To begin with, it was more of a side project for me, as opposed to something I led up to for a long time, and built upon, such as my novels. But once it took shape, I felt I had something worth offering my readers. It doesn’t feel like I need to charge for that, though.

Secondly, not only am I experimenting with content in this collection, but with publishing. I used Draft2Digital as opposed to Smashwords for formatting and distributing. The automatic formatting was impeccable, and nearly instant. Far easier than getting a manuscript ready for Smashwords. A plus.

The slight minus is that for now, Draft2Digital does not distribute to as many stores as does Smashwords. So it seemed right for now to keep the price free, should readers have to download a file format they do not prefer, or if they have to download a different app or something just to read it.

However, all of the stores that carry it are linked here, on one convenient page. More stores will be added to that list as Draft2Digital hears from the other parties. Apple iTnes is the biggest market I have it in right now, as you will see. Kobo is second biggest.

I enjoyed the experiment of writing this collection, and I am enjoying the publishing and marketing part of the experiment as well.So if your format is there, I ask you to give this free collection a try. I think there is something in it for everyone, even if you only read some of the stories. (Though I prefer you try all ten!) If your format is not there, it probably will be soon.

And as always, if you check it out and like is please review it on the store you got it from. It’s an indie-author’s career life blood.